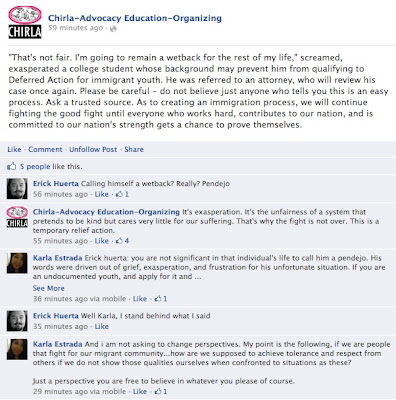 I ain't gonna lie, I'm a hater, straight up. Why do I hate instead to congratulate? If the answer was only that simple, I wouldn't be putting my foot in mouth every other day. Take for example the screen grab from earlier today on facebook. It was from Chirla's page, read it and then come back to this, that's the only way things will make sense.

As you can see, Karla has a point. Instead of trying to help someone out, the first thing I do is try to push them down even further. This isn't an isolated incident and it certainly won't be the last either. I'm not defending or taking back back what I wrote on that post, I still think the person who called themselves a wetback is still an idiot.

That being said, for those of you who don't know, that's a word I first used myself when I first started this blog. "American Wetback" was the first tittle I had when I started blogging about being undoc and what that meant for me. That was back in 2006. I ended up changing the name of the blog to what it is now a year or so later, but after I made that comment, I remembered what I did half way into taking a shower.

So for me to call someone an idiot for doing something I once did, because I didn't know any better and had a different understanding of the term then than I do now, is hypocritical. But, I wrote what I wrote because when I first saw the post, my reaction was one of, "fuck this guy. If that's the way he feels, then he shouldn't get shit from anyone. He's just trying to get his and benefit from all the work everyone else has put in. He's not gonna help anyone or try and give bac to the community in any way."

And what if he is? Is that so bad? What's it to me since I don't know that person or have no kind of connection to them. Then the comments Karla made sunk in later on in the night since I couldn't stop thinking about the post. Hence this 3 am blog post. Then as I reflected on my state of mind as of late and the way things are going, I realized that I shouldn't had been reactionary in writing what I wrote, but what's done is done.

More over, my frustrations with orgs like Chirla also manifested through that post. As things stand right now, they taking credit for doing something they never had a part in. They jumped on the band wagon as soon as the fruit was ripe and now they're reaping the rewards. I see the way they run their programs and it's about making money, to take credit and to be seen as this org that does so much work and 'cares' about the 'community.'

Plus the fact that the only way they are helping folks out with their Deferred Action application, is is they're a member of Chirla. It's $25 to be a member on top of another $40 to help you get your paper work in order. Glad to see where there priorities are, but then again, I don't now the full details of what it cost to run those services right now. For all I know the $$ is used to cover the cost of the application services, I don't now.

I realize that my personal views on how they work should remain that way, instead of taking pop shots at them here and there. And while Karla has a point about the movement being unified to make progress, I know and have seen different over the years. Turns out things have being like this decades before I or anyone I know ever came to the picture. Everyday that becomes more apparent.


A man thinks seven times before he speaks.
It's harder to make the glass than to break the glass ~ RZA
Writen by El Random Hero at 3:19 AM