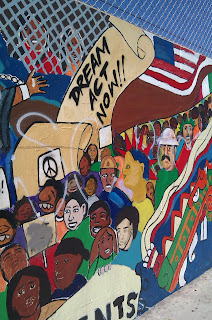 Lawd it never stops. Part of me once believed that it was just something that only happened with in the undocumented student movement, but it seems that history is full of it. And just as the legacies of fighting for social justice are carried on by a younger generation, so does the drama. It's inevitable anyway you cut.

But it really shouldn't be a surprise to anyone in or outside the movement. Drama is a part of every day life and given the intensity of the work that is done, said drama also intensifies. We are only human beings. Of course there are different ways to go about dealing with it, but if there's one thing dreamers are known for, it's being passive aggressive over social media. Like a bunch of bickering children.

Now whether said drama comes about because folks are dating within the circles, specific people are highlighted over others, difference of opinions and/or strategies etc. it'll eventually come about. The fact that the movement itself is split up the way it is right now, United We Dream vs The NIYA vs everyone else vs non-profits vs anyone who dares nay say.

I ain't gonna be all chismoso and lay out whose beefin' with who because even I don't care anymore. I'm a drama queen, I like to start shit myself and I can tell when others are doing it as well. Wasting energy and time on stuff like that doesn't call my attention like it use to. Nor do I care whose calling out who anymore, that post about Jose Antonio Vargas was probably my last hurrah if you will.

Most folks see what goes on tv, news articles, pics etc. and they think dreamers do amazing work, which we do, pero it never ends there. At the end of the day we're all trying to come up one way or another and get paid for the work that we do. The drama is never going to end even though some wish it would. If we fight among ourselves all the time, we'll never get anything done. We'll never be united, we'll never find peace, we'll never live happily ever after, and that's fine with me.

The reality that nothing is perfect and everything is romanticized became clear over time with me. Having grown and being a part of the movement in different aspects, learning about those that did work before us and how they influenced the work that is done today. None of that matters at the end of the day when you don't wanna even be around the folks you are suppose to work with in order to create social change.

The moment that happens, you should leave. It hasn't happened to me yet, hence I'm still around. But I am getting there. And if I've learned anything, aside from being passive aggressive on social media, it's that one has to communicate extensively. To have conversations here and there as things happen rather than all of it blowing up in one single moment when it's only hurting the work that is being done. But we're not mature enough to do even that, myself included.

It's all a process of growth as individuals and as a movement. If folks are altruistic about their work and intentions, they'll stick around despite the drama. Others will get jaded and leave, which is fine. But worst that anything would be passing on all this inherited drama to the next gen. of folks coming up. That is something even I won't stoop to. All I can do is me, and that's it. I know I won't always agree with stuff or like everyone, but the wisdom that comes in small doses with age is helping me navigate those roads a lot better than when I first did as I became part of the movement.