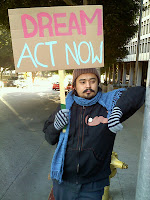 Ever have an epiphany that was right in front of your face the whole time, but you were clueless in seeing it? That's how I feel right now. Since last year, I've been reflecting on my role in the social justice movement I have chosen to be a part of. To fight not only for myself, but for others in whatever shape or form that may be. But I've never been one for the big picture. All the stuff that happens on a larger scaled never really called my attention.

Having been part of different campaigns at different levels and aspects, I've gotten an opportunity to see how things work and where I can plug myself in. When I first started out, I was taking on other roles that helped me develop in areas that haven't caught up to the rest of me. It helped immensely in helping me grow and become well rounded, but it also helped me focus on what I want to do specifically, which is communications.

In the neighborhood that I live in, Boyle Heights, I was able to become a sort of hyper local reporter/blogger. It was easy for me to write about the neighborhood I lived in because I knew what was going on at any given time. That helped me earn a reputation as a resource of things going on around the hood and of things coming down the pipe line.

Never did I once think to combine both my activism and journalism work in such a way that they both become one. If anything, for the last few years I've been double dipping and doing things here and there, but never fully combining the two and going with it. The idea of being a hyper local activist is something that I'm liking the more I say it.

Like I said, I've never really been one for all the national stuff going on. Talking about what congress, the president or whoever is doing and what we are doing to get their attention. One of the things that I find the most fulfilling is doing workshops and sharing information and resources. Whether it's explaining how folks can go to college or skill sharing how to write a press release. And at times, being the person who helps explain immigration laws and can connect others with the help they need to get out of trouble.

More than anything, that's how I contribute to the social justice movement. Not by going to every protest, march, meeting and/or rally, but by being intentional with my time and where I spend it. More than anything, it's that I'm able to instantly connect with folks when I do workshops. I'm able to answer questions, share info and see the positive affects they have.

This is where I see myself going and how I will continue to contribute to the social justice movement. By being a resource to all of my local networks, to change things where I live (block, neighborhood, city etc.) and to always continue sharing information and resources with those who need it.