Immigration Reform messaging that excludes rather than include 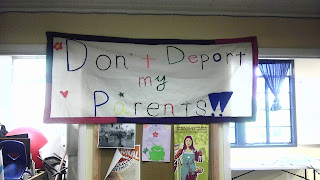 From my homie Nancy Meza: "Frame Shift when talking about immigration : We do not need to "fight for our parents " this immigration round we need to INCLUDE OUR PARENTS AND COMMUNITY IN THE ORGANIZING AND DECISION MAKING IN THE FIGHT FOR IMMIGRANT RIGHTS ! come on most of our parents were more savvy and brave at the age of 18 than we will ever be , lets give them that credit .... they deserve it , they know and understand whats going on :)"

Over the last couple of years of being around the immigrant rights movement and seeing how the wheels in the machine turn, I've had my share of issues with how things got done, what was being said, and how it was being said. Inherently, it's going to happen because even though we're all working for the same goal, we all have different ideas as to how to get there.

And with the 'fight' for immigration reform already gearing up, the messaging coming from non-profits, organizations and others is one that excludes folks, rather than get them personally involved and invested. So much rhetoric and messaging is pushed with the idea that 'we need to fight for these people.' Not in those exact words, but that's what I take away from it. 'THESE, THOSE, THEY, THEM PEOPLE.' I hate that shit.

And while I have my issues on how and what is said, like everyone else, I'm working and fighting for immigration reform that won't condem the majority and only allow a select few qualify for permanent residence and citizenship. But all of that is overshadowed by weak messaging that doesn't get anything across other than to annoy who ever is on the receiving end of that message.