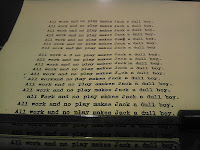 It's going on six years now that' I've been doing the couch surfing thing. I started reflecting on these last six years through a fever induced dream I had the other night that was in turn inspired by an earlier conversation I had with the current people I'm staying with. The dream was a trip and a lot of things kept coming back again and again. Mostly how I've been a perpetual house guest this whole time and the eventual moment when I know I've over stayed my welcome and have to bounce to the next couch. Something I've become an expert at.

Looking back through the majority of my life, it seems I've always been drifting in the most existential and literal sense. My parents never could stay in one place too long growing up and it continued on when we got the to the US. The reasoning always changed, but the moving didn't. My current life right now is one that has been built upon happenstance and as such, it's no wonder it's taken me this long to even find any kind of stability that I've never had.

I gave up asking and wondering the whys of things, rather, just going with the flow of things. This has afforded me once in a life time experiences that I can never give back, for better or worse. But after living like this for all these years, I'm finally in a place where I can finally stand on my own. I have the capacity to be in my own how and not a house guest. Not taking up space, annoying others or being an awkward inconvenience to have around. That's something I won't miss at all.

And while it won't be easy, by the simple fact that I have finally reached a level on independence I should have reached long ago, I wouldn't have been able to do the things I've done, meet the people that I've met and most importantly, never would have made the friends that I treasure with all my heart. But we'll see how things go, there's a lot more awkward moments to come before everything comes to a close, so I'll just have to go with the flow.
Writen by El Random Hero at 4:00 PM