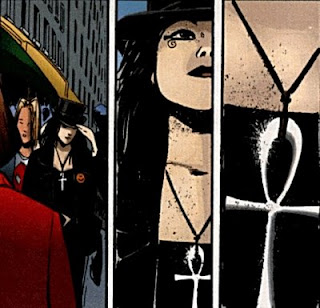 I was born with a hole in my heart. Apparently that's a bad thing and
my parents have told that story a few times to family and friends when
I'm the subject. Secretly, it annoys me that they talk about me in the
third person when I'm right there in front of them.

They oporated on me, patched me up and basically saved my life, but
since the day I was born, Death and I have been, well how can I put
this...linked together by the faiths. I have been dancing with Death
for a long time and I'm beggining to question if I'm meant to be the
type of person that dies young.

I'm not being suicidal or anything stupid like that, it's just that
over the years I have seen & done things that make me question my life
expectensy. Physically I'm going to be tore up when I get old. Joints,
eye sight everything. I'm not taking good carr of myself and I know
it's going to bite me in the ass later.

On top of that I have had numerous near death experiences where if
things didn't work out the way they did, I wouldn't be here. I
remember that when I was an infant, my parents told me I was stung by
a scorpion. Not a good thing to happen to you when your an infant. To
this day I still have twiches that I think are after affects of the
sting.

I always did stupid stuff as a kid, way more stupider than the normal
stupid, trust me. As a result I'm pretty sure I put myself in needless
danger but can't remember. Most of my near death experiences have been
involved with cars. Might explain why I get car sick.

I remember the one time I was sleeping and leaning on the door, my fad
turns and I go flying out, but I manage to gran on to the window just
in time. I can still remember looking down and seeing the road until
my dad stop the car. I got in and I was crying and the first thing my
father does is yell and scald me for not closing the damn door right.

I remember this other time, again while sleeping in the car, we where
on the freeway driving home after my dad closed up his shop and he was
too drunk to be there. Some metal rod came outta no where, hit the
hood of the car and smashed the window I was leaning on. Any change in
direction could have resulted in me getting my head smashed in or the
rod going through the windshield and hitting someone else. I still
remember having to translate between my father and a highway patrol
officer what happened. In the end we just forgot about it and went home.

There's a few other times when I almost got run over by cars, but
that's normal living out in L.A. My parents have had some unique
experiences with Death themselves and what can I say, we're just
accident prone.

But I see beyond that. I'm highly spiritual and aware of beings beyond
our understanding and reach. I see all of these experiences as signs
that I need to be aware of my surroundings, that I'm doing something
wrong and need to change it. I belive strongly in destiny and faith
and something or not just coincidences that just randomly happen.
Things happen for a reason and I live by that.

Astrology and signs is all b.s. To me because there's no real history
or thought behind it. Growing up reading comics and watching cartoons,
these believes have been cemented in me and there's no changing my
mind. I believe in all Gods and traditions because they exist and when
followed the way they're meant to be followed, they will lead you to
prosperity. The bible being one of them, I know.

Life and death are parts life of life and I accept that. I still think
that I might die young because of my struggles and the things I have
done in the past. No one leaves the earth without paying back all of
what they have done, equivilant exchange. Everything is recycled and
renwed because things don't just form outta no where or disappear into
nothingness. Everything is connected and that's how things work, in
circles.

As of late I haven't seen death looking for me, but I see her around
other's and even though I bless myself everyday when I step out the
door, pay my respects to La Virgen and everyone else in between, I
know that Death isn't to far away, least not from me.
~ con safos ~