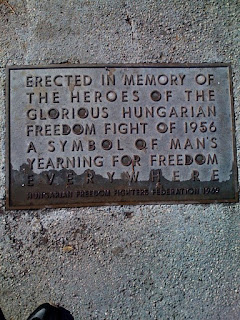 ~Mural across the street from the Mexican Consulate in MacArthur Park~
I Wont lie, I hate having to come here to renew an I.D. to a country I no longer consider my home country. I'm proud of my Mexican Heritage and embrace it, but I can't call it my home. When people ask me where I'm from I say East Los Angeles, but was born in Mexico.

I came with my friend "Sandy" because hers expired already and since mine expires in June I'd figure we'd go together and get it over with. As I'm writing this right now she's inside going through the motions and getting the I.D. I on the other hand lacked one key component needed to renew the I.D. my birth certificate.

I seem to have missplaced it moving around soo much and until I find it I'm screwed. Still, I'm a people watcher. No matter where I go I always survey my surroundings and the people near me. What they look like, how they dress all that stuff. Here at the consulate, all I see is the different "stages" if you will of people assimilating to American culture.

It takes one to one and boy can I tell them apart. Honestly there's a lot of conflicting emotions that come when I'm in situations like this. I see those who are still new to this country. There fashion sense gives them away real easaly and I feel sympathy for them. They have a world of struggle ahead of them and they're oblivious to it. Some come alone, others in groups or with families.

What ever makes the process go by faster and easier. I see them with their folders containing the only documents that prove who they are, that they exist and that they're the person they're claiming to be. Identity theft, even amongst Mexicans, is rampid and certain I.D.s aren't allowed to be used as collateral.

Some people are immidiately told that the I.D. And documents they have aren't valid and they turn them away almost as if they're lepers. Through the metal gates, I see others looking in with faces of disappointment. You look at them and you can't help but feel depressed and share in their personal misery.

Some show up with I.D.s that can be easily made at home or at a check cashing place that tricks people into thinkng they have a real I.D. Sometimes the lines seem like they will never end as you wait your turn to see the Wizard so he can give you what your heart desires.

Then there are those like my friend and I who stand out like sore thumbs. We talk in English and look as if we're in the wrong side of town. There are others like us, the first and second generation of kids that assimilated but were born outta the country. At one point I almost wished the whole process was in English so I can get it over with in a hurry.

To think that on out way to the consulate, walking from the train staion people casually offered us "micas" making gestures with their hands. If one was to get any kind of fake I.D. MacArthur park is the place to do it. A lot of contradicting feelings surface when ever I'm here not just because I lived around here, but because this is where the majority of immigrants get their start.

They come here, get a job, meet someone, have kids and move ahead with thief lives if they're ambitious and smart enough to do it. I've let go of the past, but I haven't forgoten about it. I hate having to get an I.D. from a country I don't call anymore. Sometimes I hate being Mexican and most of all, being inthis situation. I hate having to fight for crumbs.

I have no choice in the matter, but what doesn't kill me only makes me stronger. At this point in my life, nothing can stop me. Only myself.
Writen by El Random Hero at 11:17 AM