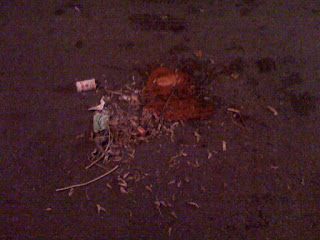 Did I spell that right ? It's 1 a.m. & lazy. A broken bottle of
tapatio. It's safe to say that the average Latin@ has enough of it in
them to last a couple of life times. Myself included :) No, as great
as bit sauce is, I am in one of those mOOds where I'm thinking too
much. How can i not, I'm moving back in with my parents. (FYI For the
last 2 yrs my family has been living in Utah. Due to the economic
crisis, they can no longer prosper over there and decided to move back
to L.A.)

It's funny when we go through things with a different set of eyes. My
parents moving is nothing new, they did it a lot when I was growing
up. Except that this time around, it just seems...more...repetitive.
You know how in the Matrix, Neo sees the matrix code in the real world
toward thre end of the movie and kills agent Smith ? Well that's kind
of how I see things NOW. I see the code that runs the world.

I have a ton of ideas and thoughts going through my brain, all having
to do with the parents moving back thing. I'll be at home, won't pay
rent, per say, be with my family and have a home. No longer will I
have to deal with the stuff I deal with at my friends house. God bless
them for helping me out but I don't wanna deal with their drama as well.

I'll be writing more about the move and thoughts that come up. Already
I see and realize things that I took for granted or may have over
looked. For starters my parents have WAY TOO MUCH crap to decorate the
house and make it pretty. Blah. I'll be sharing a room with my younger
sister as well. My other two sisters stayed behind in Utah. Yes life
shifting once again. I'll take on whatever comes our way, and when I
say "our," I meanme and my familia. I may have grievensas about them,
but sometimes we forget they're all we have in the end.