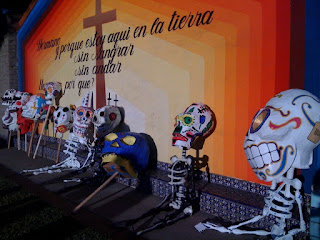 It's funny how the days events connect sometimes. I read the story "Finger Dance" in the book, The Republic of East L.A. by Luis Rodriguez and it hit a soft spot. It's a short story about a family enduring the transition of their father/husband making the transition into the other life after he gets stomach cancer. Sorry for spoiling, but pick up the book anyway and read it. So here is where I make the connections to that story. In the past I've written about my father in a not so positive light and if you have stressed relations with your father or family, you know how it is and you ave an understanding of where I come from.

Still, that doesn't excuse it what I wrote, even though that's what I think and this blog is a sort of "safe" zone for that stuff. Cause you know a blog on the internet is the best place to tell secretes :-P I digress from my point, which is that maybe I'm too caught up in my own shit to cut the old man some slack you know ? It's like this. Friends have been loosing family members this year and even though I wish I could say something to make things better, I can't. No one can really. You just support them anyway you can and be there for them. The thing is though.... that story hit close to home because of the circumstances of it and a friend who went through the same thing. It's only when something hits that close that we pay attention no ?

So from there it kept getting more and more intimate, as if Rodriguez took that part of my life and made me live through that, because it's a possibility. Not only that, but Dia de los Muertos and a full moon can make anyone a little extra emotional. So fast forward to me eating at home today after I got home from school and I see some grammer excersises on the table thinking they're my sisters for an assestment test, but they're not hers. They're my dads. Turns out he's taking a class in the evenings to brush up on his English. A man who never made it past elementry school because he had to work to survive. Never had an opportunity to get an education. He's borderline illiterate but he's there.

Took me by surprise really, especially as he made his way out the door with his jacket and homework in his hands. Thinking about that and the story I read hit that soft spot. Specially since a part of the story put focus on the strained relationship the kids had with the dad and how they never really showed affection to each other, weren't there and all that mumbo jumbo. My life mirrors that so I got to thinking and thinking usually leads to writing and here I am. It's selfish to write some of the things I write knowing other people are enduring worse, but I'm only human. We learn as we go and I learned that I gotta be more self aware of what really is important in my life rather than the drama happening around me. It's hard to do that on a daily basis, but we can't forget about it.

Now I can't help wonder about my mom's and what she may be thinking about. She's the same, never went to school because of family needs and what have you. I stop and ponder on whether I should be doing more to help them in that aspect, but I have enough to worry about as it is. Sound selfish but it's the truth. How can tey expect me to make it when I still gotta deal with them to the point that it holds me back. Nah man. I'll do what I can but it ends with me. These cultural traditions of working for nothing, oppressing women and all that Mexican BS end with me. They're getting reshapped and adapted into more positive traditions rather than negative ones. I'm the first in my family to get this far, c
~ con safos ~
Writen by El Random Hero at 8:24 PM