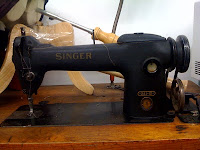 I do a lot of people watching. I've had a knack for it since ever since I was a kid. Can't really explain why I do it because I just do it automatically. No matter where I may be, I see things and I analyze, make mental notes and laugh to myself about observances I make. I like to think that I may have a thing for sociology since I do it so often and through an academic lens, it would seem there is more to it than noticing simple mannerisms and social behavior. Everything a person does, conscious and sub say more about how they are than what they're words, case in point, actions speak louder than words.

Everyday I see something and on some days, depending on my mood and metal state, I write poetry or just make mental observations for future reference. Friday evening I paid my uncle-cousin a visit at his tailor shop. I say uncle-cousin because his dad is cousin-brother with my dad who married my mom, who's aunt was married to my dads cousin-brother, making their kids uncle-cousins. Yeah, I know. I bought some pants with money that I was going to initially use to buy a bike, so me being the short man that I am, had to the pants leg shortened to my height. His tailor shop is in the L.A. Fashion District. Initially I was going to write a post about my observations in the fashion district because it really is something special in terms of the dynamics and separate world that it is. I'll keep things to what I saw at his shop.

During my wait to get my pants fixed three different customers came in to get something fixed or to pick something up. I can't remember the order they came in but one man was Chilango, another African American and the third middle eastern. These are the dynamics and social behavior I observed from all three watching from the side and not interfiring.

~ Chilango is a term used for residents of El Districto Federal in Mexico. They have regional accents and mannerism that are obvious to anyone that understands the Latino community and the different, regional dialects. When he walked into the shop, he greeted my uncle with comradery and slang that easily establishes a mutual relationship between the two and segways or incorporates small talk of how business is going and how the family is doing, if he knows them. He proceeds to tell him what he needs fixed, down playing himself and how he's always getting holes in his clothes and how he is a dork. My uncle ask him if he's in a hurry and he replies that he's not. In fact, he stresses that he is in no rush and for him to get to it when he cans. Since he is a regular customer and most likely works nearby, his job is done quick, as it's just putting a patch on his jeans. He ask my uncle how much it is, money ready in hand and my uncle says to him that it is free of charge because he is a regular. He tells him not to worry about it, that whenever he has small stuff like that, to bring it in and he'll take care of him. The man thanks him, gives a hand shake and goes on his way.

~ The Black man walked into the shop and immediately commanded attention and service from my uncle with his loud voice. This was not done in a disrespectful manner, the mans personally was is loud and territorial in the sense that he wants everyone to know of his presence there. He told my uncle that he needed his pants altered and exclaimed and asked if the job was going to be done fast because of the urgency and tone in his voice that was if he was wearing headphones and didn't know he was talking too loud. He talked loudly to his friend who was out side about his pants and couldn't stand still when my uncle was adjusting the length to his desired length. He changed back into his regular pants and waited outside with his friend as he talked on his cell phone through a wireless ear piece. His conversation was overtly loud and he discussed his personal issues with the person over the phone, always making sure to let everyone know that he is there. As time passed, he was beginning to grow inpatient just as my uncle was putting the finishing touches on the pants. He charged him $7 for the service and he was on his way.

~ The Armenian man had already left a shirt earlier in the day and was just now coming to pick it up, along with a pair of pants as well. He greeted my uncle with a loud, "my friend" and he replied. He told him that his clothes were ready and asked if he wanted to try on the pants to see if they fit to his liking. He said no and just tried on a shirt that was also altered. The man was accompanied by an older man that could be his father, but I could not establish that. He tried on the shirt, looked in the mirror and liked it. All the while he talked to the older man in his language very rapidly and loudly as well. Of course I couldn't understand what they were saying, but I know that part of their conversation was about the clothes, mostly because they looked and grabbed the clothes like anyone else having a conversation about an article would. He paid and asked if he could leave through the back door of the shop.

I paid special attention to the mannerism of the Armenian men because they say soo much with little to no words. Latinos/as are of course friendly with Latinos/as because of the race association and established common ground between the two. The Black man didn't know if my uncle would be able to speak fluent English and had a loud, natural presence that comes being over masculine and personal issues of not being the center of attention and letting others know of his presence where ever he may be. In particular, I have noticed that while the Latino and Black men were direct in their contact, the Armenian man played dumb in the sense that he used language as an excuse to play down any notions of being able to understand business or any other transactions. I've noticed that the less English they know, the more they rely on communicating with demands and overt gestures to frustrate others into getting their own way. They use it almost as a handicap, knowing full well what they are doing, but still doing it to save a buck or to get faster service.

I have seen this in other Armenian men and in some women when conducting business or being involved in a transaction. If things don't go their way, they are quick to anger, place blame on the other party and easily frustrated when cooperation is not in their favor. This, of course doesn't describe all Armenian people, just the one's I've seen. When they are able to speak fluent English or are Americanized, those same habits still surface, with more attitude. Much like an empowered Black women who doesn't take being disrespected lightly and is quick to anger and place blame and fault in others for her own short comings. Fueling a napoleon like complex and harboring a negative attitude toward anyone that doesn't fulfill her wishes. But, these are just my own personal observations.