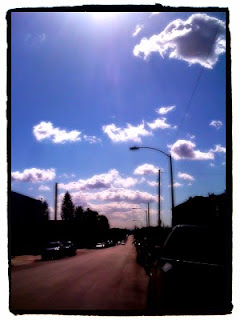 There are days like today and yesterday in which I feel stupid and a
bit worthless. I spent 3 years of my life, after high school doing
nothing, while friends were getting their stuff done at various
colleges. Now they're either done or getting masters degrees and here
I am, at a jr. college transfering.

There's nothing wrong with that. We all make our way in due time. It's
just that frustration and a sense of hurry have been coming and going
through me. I wanna get to those classes were it's theory, discussion
and writting bad ass shit. Not sitting in class, having the teacher
explain something trivial, but because I need this class I gotta sit
there and deal with it.

Lé sigh. I also get feelings of uncertainty. The road is not only
getting longer, but harder. I know that just like everyone else,
there's dues I gotta pay inorder to get where I am going. A ton of
struggling and suffering. Testing of my will and commitment. The hard
part hasn't even started yet and I'm already complaining. But I'm
ready. I feel like I gotta catch up get stuff done. All in due time.