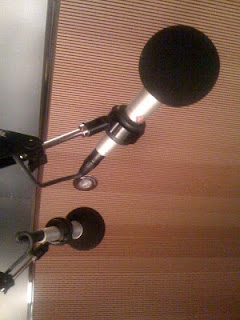 So I just spent the last few hours trying to figure out how the hell
to upload my storycorps interview on to my blog. Blogger isn't good at
that kind of stuff and since I don't have my own domain, yeah it ain't
gonna happen. But don't fret, you're not missing out on anything,
except hearing me talk and say ummm a bunch of times. And also
missusing the word "stigmata" as well. Plus I made it a point to go
since I missed out a year ago and they're in East LA.

After listening to it since I first went in for the interview, I
realized I may have mentioned a name here or there when I shouldn't
have. At the time I wasn't thinking about having respect for that
persons privacy or talking about them without names, but I did so none
the less. So, it works out that I can't and won't upload the audio.
Just knowing that eventually someone will hear ait nd that it's in the
library of congress for the rest time history is godf enough for me.

I had a blast doing it and I wanna thank my friend "straw hat" for not
only interviewing me and being a great friend, but for just being
there and helping in the movement. I know she does a lot and she has
enough work to do, but she still gives me rides every now and then and
listens to my beefs. Thanks :)

Allies and friends like that are rare in this world. As for why I
participated in storycorps, why not ? I tell my story everyday here or
in front of an audiance or a presentation. As activist, residents and
people, we need to share our stories with everyone. I don't know how
many other DREAM students storycorps may have recorded, but I'm
certainly not the first or the last. I will continue to put a face
behind this urgent issue/fight until things change for the better.