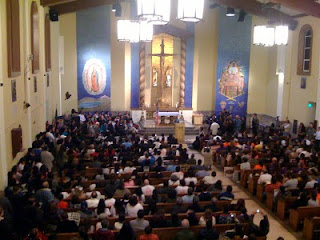 Luis Gutierrez, Judy Chu, Lucille Roybald and the LAPD chief were some
of the people there and said a little somethin' somethin'. In short
that's all that happened. Talk. All anyone did at this town hall was
get reactions from the people there by yelling or starting chants.
Nothing got done, but it's a baby step in getting people involved and
going on this campaign.

Whetherits calling reps and sending letters to elected officials, we
all start somewhere. I for one attended just to be a metiche and
because a friend was one of the speakers. He held it down for the
dream act of course, which I was holding a sign of on the second
flooryelling so everyone could see me. Good stuff. Like I said, too
much talkingnot enough doing.