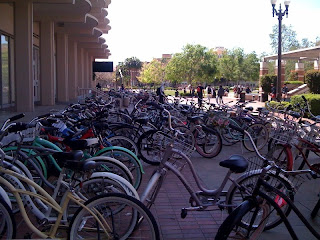 Like a splash of freezing water on my face. That's what it felt like today when I got to USC. I rode my bike there, 12 miles total :-D Anyway, I wanna write this out before I knock out from writing something else. I was tripping out. I've never seen soo many people on beach cruisers at once. It was like a see of madness when people were going to their classes. Like some sort of stampeded. Ohh yeah, I was there for a social welfare conference to preach the greatness that is Dream Team Los Angeles. It was cool, back to my observations. Wow. I'm so use to the bubble that I'm in that I forget what it's like to get out of it.

I've been to other campuses and felt the same thing, but at USC I felt the energy that the school and students project. This feeling of rushing and importance. Like their house was on fire. Everyone plugged in into their worlds, ignoring everyone else, being super rude. Just like East Los zing !! It really is intimidating to be there and even though it sounds redundant and played out, I got that, " I don't think I belong here" vibe. I know better, yet years of conditioning still creep through you know. USC, if you're here it's because you ain't fucking around like at my school. I people watched the whole time and when I was at my table, I wrote "undocumented student org" under a DTLA sign they provided. I wanted to throw out a flag and get people's attention, which wokered because they asked me for more info and signed up for email spam, err updates. One girl thought it was an Aprils fool joke, but I told her that it's not. The highlight of my day was the bike ride really. 12 miles aww yeah.
Writen by El Random Hero at 11:51 PM