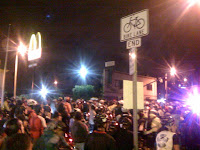 The LA Marathon is the only time of year in which 26 miles of Los Angeles streets are closed off to traffic and unofficially open to city cyclist to ride. While I've been doing this ride the last couple of years, I started doing the ride when a friend invited me along, the marathon crash ride has blown up in park because of the Wolfpack Hustle. With more than 2,000 riders doing the ride today, all starting at 3 am, it was a sea of lights and bikes as far as the eyes can see.

Every year is different and without a doubt, this has been the biggest year, for both the crash ride and for the number of folks that I got to come along for the experience. Ironically, I think I've had a different bike for every ride as well, and when your doing 26 plus miles, it makes a huge difference. While there's soo much to say about what 2,000 cyclist riding their bikes at 4 am, rain or shine, the fact that the LAPD had to come in and escort riders like they do every month for critical mass, and the fact that the majority of riders were people of color, I think the ride itself says it all.

Some ups from this years ride, again were getting more folks to come out and do the ride, specially with the networks that were built with the OC to LA Dream Ride, the fact that it didn't rain like it did last year and putting in some major mileage. It seems the older I'm getting, the more cycling I'm doing. I've already done two 30 plus mile rides within the same month. And while I don't have the best bike for these kind of rides, it does the job. Next up, Ciclavia in April.
Writen by El Random Hero at 9:52 PM