Thoughts on the OC to LA Dream Ride 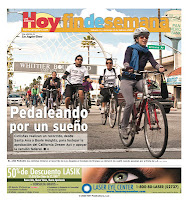 The OC to LA Dream Ride is gaining some traction in the media. How do I know this, cause we got the cover for the weekend edition of Hoy. And as I was writing this post and fixing the hyper link, I got distracted by reading two more articles about the ride. One on the spanish blog for Metro Los Angeles, El Pasajero and the other for the San Fernando Sun. Part of me is hella excited for the ride and the fact that we have 80 riders participating, which was around the same turn out last year.

The ride has def been a stress factor for me in having to take on the majority of the work load, since the folks who helped planned it last year couldn't do it since they're working full time. I, on the other hand, am unemployed, still. Anyway, planning the ride the second time around has been much more easier than it was the first time. But isn't it like that with anything? 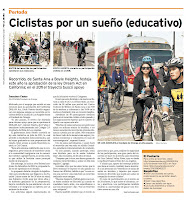 Streamlining the process via an online application and pay pal made things a lot simpler, gotta love google. Not only, that, but having amazing volunteers who can be entrusted with handeling other duties such as connecting with others or cooking dinner and lunch for the ride, made me stressless. That and I only had a month to put everything together because the winter session class I had left me no extra time to plan for the ride during the month of January.

After the application was made live, it was all a matter of connecting with the same folks we worked with last year, which are all amazing for helping us with the ride and supporting us in all the work we do. I spent many an email checking, coding and making sure folks had the right info at all times so they could just follow instructions and sign up no problem. Sigh, but alas you can lead a horse to water, but you can't make them drink.

Of the numerous things I learn about people when doing work like this is that, no matter how simple things are, making them as clear as possible and trying to just simplify the process, others tend to make it seem like brain surgery. I mean, I put my info on the damn thing and your asking other people questions that should be directed at me, when I specifically gave you my number? Not only that, you message me through facebook rather than text or call? People are just becoming more and more alienated the more technology we get.

But that's just the motion of the ocean, and it can't be helped. One just has to navigate the best they can and go along with them. I've learn to deal with all sorts of logistical problems that come up from putting together get togethers to 80 person bike rides. Truly, these are skills that have come in handy day after day and only keep improving the more I do and the more new boundaries are pushed. But I wound't have it any other way. The energy I feel, connecting folks to the biking community, and being part of something bigger than me, which is a rare change since I'm pretty self centered. At the end of the day, it's all in a days work. 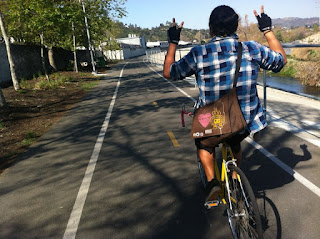