Interpretations of My Life in Theater 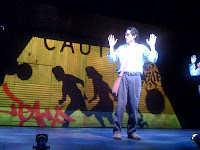 I don't know if I'ved expressed this before or enough, but I love Theater. There's nothing like going to a great play/show and coming out of there being blown away by the caliber of the acting and story telling that goes into productions. And more often than not, I end up catching plays that have a Latino/a theme and/or delve into immigration or other topics that have folks look within themselves about how they live their lives.

This time around it was done through a lens of sardonic, but brutally honest, lens in the way only Culture Clash can do it. 'American Night: The Ballad of Juan José' is an amazing play that looks at immigration, racism and the treatment of folks in major historical events, that range from the signing of the Treaty of Guadalupe, the internment of Japanese Americans in WW II and the civil rights movement. If you wanna read a full review, check it out here.

And like everyone else, I was entertained for those 90 mins. I laughed my ass off, nodded when I caught hidden meanings or recognized some historical facts, but as soon as the show was over, unlike everyone else watching the play, I find myself being reminded that I'm actually living the life that was just portrayed on stage. All that talk of racism, xenophobia and discrimination that was just filtered through comedy and acting is my reality and much like an enflamed zit, some days are better than others.
And for a split second, as I stand clapping and laughing, part of me wants to climb up on stage, snatch the microphone from an actor and start sharing my story. To tell all the white people in that theater that this shit isn't just a 'dark time in history' or make belief, that this is the reality for millions of folks like me. Right then and there, putting myself on blast, telling everyone I'm undoc, that this is only going to get worse and that the only way things are going to change is if folks do something about it. Vote for pro-immigration bills, support them with work things of that nature.

But I don't. I continue clapping like everyone else. I gather up with my friends and proclaim my fondness for the show and how amazing it was. I go to the rest room and wait in line with a bunch of elderly white men, trying not to piss myself from the coffee I had earlier. I wash my hands, wait in the lobby with friends as we share favorite scenes and witty lines. We drive back to our part of town, drop off a friend, grab some food, continue talking and off to bed I go. Yeah, my life is really harsh right? I'm really struggling ke no? How horrible it is to live the life I live.