Alchemy of the heart 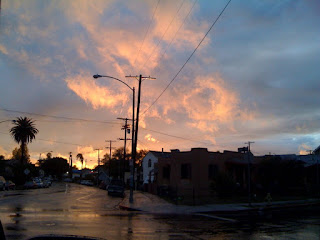 You see that sky right there ? That's how I feel on the inside right now, like I'm on fire. It's both a good and bad kind of burning. First the good, California State University Northridge, fall 2010. Yes, today I got a letter to set up my online account and to track my progress. Somehow they knew that I have all my inoculations already. I got send in my transcripts ASAP and basically start working as much as I can at a job I completely HATE more than anything in life, considering I don't harbor hate for anything. Just setting up the stuff online got me all psyched up, like if I was going to wrestle someone right now.

Now for the bad, it's hard to describe and narrow it down because everyday is different. A few days ago I had three dreams in a row, one that I forgot about and two that I remembered. I didn't like the last one because it was at CSUN. Maybe it's anxiety for the change that is taking place, the work that I have done and the five years I've spent at my community college getting to this point. Finals are also next week and that only adds fuel to the anxiety. There's soo many thoughts going through my head, I can't make sense of it all. I wanna sit down and talk to someone about it all and get it off my chest, but instead I find myself, here, writing them out because I know friends are dealing with their own stuff as it is.

The days are going by faster and faster and my state of mind shifts from one end to another as if it was a freaking pinball machine. I wake up with the blues, but by mid afternoon I get into a work groove and go on about my day to day stuff. I don't like it. I don't like it one bit because I know what's causing it. My chest feels empty and I know why. It's a delayed reaction to say the least, but I know what's causing it, heart ache. At first I was busy with school work to keep me going and keeping me away from that route. I went out with friends and to events to clear my mind and try to go back to the way things use to be 7 months ago when I was happy being on my own. It's not happening.

It's not messing with my work, but it's there. That empty feeling. It's like, one day I woke up and I realized what had really happened. What I lost and I looked to myself and saw that deep casm that reaches the horizon, it was empty and barron. I realized what I had and it began to hit me. I was in love with someone and I lost them. I know it's love and not infatuation or anything like that. I know that because I feel deep inside my chest and heart. This totally sucks. It's horrible. I hate it. In the past I would spiral into lunacy, but I know better. However, it still can't fix how I feel. I know things get better with time, I've done it before. This time around though, it's not getting any better. Time is frozen. It's like I don't even want to try and be with someone else because my heart won't be in it.

I can find an aztec princess who is into all the stuff I'm into, creative, an artist, active in life and the community, looking at the big picture and helping others, spreading the seeds of knowledge and all that good stuff. I have no doubt in my mind that in the circles that I am a part of I will find someone of that caliber, but I don't want that. I know what I want. I don't need to see what else is out there because I know what I want. Yet, there is a distinct difference in the things that we want for ourselves and what the creator, the universe and life have in store for us. I remember telling a friend that rejection is life's way of saying that even though we want to be THERE, you really need to be HERE. It's hard being alone again. I was alone and happy once and I gotta find a way to get there again. Trying to forget someone you love is like trying to forget someone you never knew. Sad face :-(
Writen by El Random Hero at 9:15 PM