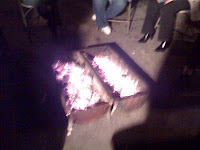 ~ My mom is something when she's drunk. Come to think of it, I've never seen my mom drunk. My dad a bunch of times but not her. She works hard and she deserved it :) Anywho, I've made some changes to this place. Ive' had the same layout and color scheme for going on what... . three years ? Damn that's a long time !!


The first thing is the picture of the flag, which in a previous post got a lot of haters hatting, so I figure why not make it the focal point and piss more people off ?!?! Yeah, but it's more of a statement of the dualities of how I live my life and the two sides that overlap, mix and form something new altogether. Made the colors super bright to make you feel like you're on ecstasy when reading things, updated the links and caption and gave it a nice polish as well. Good stuff.

"We don’t see things as they are, we see them as we are."

It was great being with my family for the holidays after being away from them, specially since the dynamics of things have changed for the better. I saw an uncle who I haven't seen since I first arrived here and 10 different people were sharing a no bedroom studio apartment. Things are getting better as we all get older. I like it. The holidays are whatever to me now and even when I was a kid because my parents just when through the notions. They don't go over board with holiday cheer like other people, which works out cause Christmas is a BS holiday to begin with, but that's just me.


"fear is the path to the darkside. Fear leads to anger, anger leads to hate, hate leads to suffering."

Other than that, things are good in the land of El Random Hero again. For the better part. You know what I mean don't act dumb. I got some more inclinations to write about, mostly reflecting on days of future past, acknowledging my growth as a person and all that good stuff that comes with learning and growing. There is still soo much for me to learn and experience, it's scary. Shake you to the core scary. It's part of growing. With that being said, thank you to everyone who stops by and checks in on me once in a while. Readers that comment and not only support me, but encourage me as well. It's nice to know that I have some form of support like that. Even through the internet. Happy day of being family, not working and enjoying home cooked food.


"train yourself to let go of everything you fear to lose. Attachment leads to jealosy, the shadow of greed that is."