To recognize yourself or not, that is the question 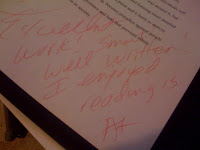 In my life there has always been a divide in recognition. You see, growing up my parents never gave me positive attention in recognition for doing a good job at something or encouragement that we all crave and look for. That "good job mijo, I'm proud of you." *hug* "Let's go buy you a paleta." *smile* I would remember as a kid my dad bragging to his friends, in a drunken stupor, how I got 8's, 9's and 10's when I was in kinder garden. That's as far as it got really. When I graduated from high jr. high and high school all we did was go to the buffet. Hmm... in retrospect it all seems so empty and meaningless now. It's not their fault though. They didn't get any of that support from their parents either, in fact they got quite the opposite from what they say, so It's only natural that they wouldn't know how to express such feelings genuine sense of recognition, but they showed it in their own way.

Last week I got back my paper, which I posted here, on relating a story from "The Republic of East L.A." to stuff from class. I got an A+, as you can see from the pic. When I got the paper back I had mix feelings. For one, the paper was easy for me to write. I didn't struggle doing it and it all flowed really. Partly because I payed attention in class and did the reading and stuff, still. It felt weird, specially reading her comments about how she really dug what I wrote in tying both the book and class to my personal stuff. I wanted to post it on facebook and be all like, "I got an A+ on my paper. Awwwww yeah !!" but then I said, "no. It's that kind of flashy'ness that takes away from the grade and work you put in, being all loud and proud. It's only a paper." I later ended up telling one person. I couldn't help myself :-)

Hence the pondering of how to go about recognizing a job well done, but not being loud about it you know. I kept it to myself and a lot of times, I tend to hold back on things I do, not all the time hahaha. So, I got a surprise email from my journalism adviser. She sent me a letter that was nominating me for an award for stories I wrote on animal cruelty in the barrio and raising awareness about it. Basically I would write opinion stories on why not to buy animals, cruelty issues and the fact that animals are not things. I wrote them a lot during the holidays because that's when people give animals as gifts. My teacher said she submitted it somewhere but since nothing ever came of it I forgot about it.


Reading the letter the other day kinda put things in perspective again. If we don't recognize the hard work we put it everyone once in a while, even if it's just use patting our selves on the back, we won't grow. We all do tremendous things and sometimes it's not necessary to have others tell us that, so long as we know it and it's coming from a good place within is and not just to stroke egos. I recognize the wrong things sometimes, but thankfully, with age and more book learnin', I'm learning how to be proud of the work I do, even if I don't tell anyone or I get a paleta for my efforts. I'm old enough to buy myself my own paleta now. Here's the letter, not to brag or anything hehehe ....

Dear Santa Claus,
Fulano suggested that I write you when I brought to her attention the enclosed article by Erick Huerta, which appeared on October 17 (2007) in the East Los Angeles College Campus News. As a former member of the Steering Committee – my late husband, "blank" and I worked closely with "her" – and as a professor of communications, I am too aware of how the recognition of a piece of journalism can deliver as much impact as the original story. Erick Huerta is a journalism student at one of the largest community colleges in California. He can easily become a voice for the voiceless animals in a largely Hispanic and largely immigrant community, a voice that is sorely needed. I would propose that awarding him with Genesis recognition would have far reaching effects for the animals in East L.A. Thank you for your consideration and for your good work.