If it walks, talks & acts like a cholo it's probably a cholo 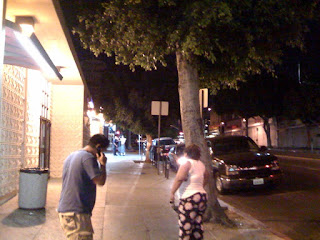 Can you see them aallllll the way in the back ? With that white light from a burger place ? Well they're there and yes they're cholos. How do I know ? BECAUSE YOU CAN SPOT ONE A MILE AWAY !! The way they walk, compose themselves, act, talk, look everything. So as I was walking home waiting for the light to cross the street, I see THEM on the other side crossing strutting their stuff like as if they own the place in front of a police cruiser waiting for the light to change. They get half way down the block and as the cruiser makes a HUGE u-turn they stop the three guys. Of course they know the routine and put their hands behind their backs and everything, answering their questions and what not. Yet the whole time since I first saw them across the street all I thought about was, "I hope cops stop you guys and throw your somewhere where you can't be leeching of everyone else and making life miserable for everyone else around them.

talk about careful what you wish for huh !? It's weird. I was talking to a friend the other day saying that my perception of cops is totally based on stereotypes because growing up in the hood, you are taught that police are evil pigs that are out to get us and make life miserable for us. While this is not TOTALLY UNTRUE, I have never had a negative experience with an officer. I have never been pulled over for being brown, looking a certain way or anything. I do get hit up by stupid cholos because apparently I look like them. Soo when I see them get pulled over like that, I smile to myself and say, "good." Does that statement sound wrong ? Hell no. Even if it does I don't care. Fuck those idiots. They had their chance and they choose to not only waste it, but to make life for others miserable. People like that are just taking up space in my opinion, BUT THAT"S JUST MY OPINION. It's not about having pride in our RAZA and being all FUCK THE MAN type mentality.

No. I'm tired of these dumb asses ruining everything good in our neighborhoods. I see them and I could careless about them as human beings. I may seem like a horrible person or a jack ass or ignorant or what have you, but screw that. Some of you reading won't understand where I'm coming from and that's OK, other will and others will think I'm a horrible human being as well. Ohh well that's how I feel and see things. Violence can never be eradicated from any neighborhood or community, but it can sure as hell be kept in check. Police brutality sucks and racial profiling, as the president himself said is stupid and ignorant, but you know what ? As long as they keep pulling over anyone who looks remotely like a cholo, acts, talks and walks like one, then I say pull them over. The world doesn't need people that take away life and energy from others.