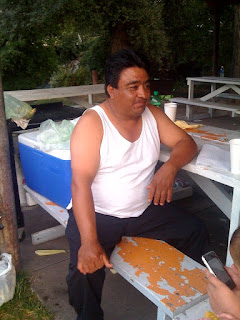 I have a, how can I put this, ackwerd relationship. I should be
greatful and joyful that I grew up with a father in my life right ?
Well what can I say, I don't see things like that. He has legal
residence and because things go so bad back home, he's here in LA
looking for work to move my sistas and mom back. How he plans to do
this remains to be seen and that's my biggest issue with him.

He doesn't speak fluent English, yet he's made it so far in life with
little to now skills. Just a work ethic that will get him through
anything he sets his mind to. I admire that about him, but that's
about it. I don't admire much of him as my father, but more on the man
I remember when I was growing up.

It frustrates me that no matter what, he won't change his mind and go
off and do something with the greatest of hopes and ambitions, giving
it his all no matter what anyone says. He goes out and does his own
thing. He's his own man and no one can ever take that away from him.
That still doesn't make up for the fact that commen sense and logic
escapes him sometimes.

So here he is in LA again, trying go find work and digging in the old
holes he use to know. He gets me to help him when it comes to legal
info and translating of course and that frustrates me. I know that
when he has something goi g he'll want me to go help him and I know
that I won't. I don't really know why I resent him so much now.

He's my father and he's respocible for molding me and my core values.
Because of him I am who I am one way or another, we're interconnected
like that. All family is. He's still the same man I knew as a kid.
Driving drunk when the whole family is telling him not to. Starting
some sort of misadventure, shennanigans that'll end up who knows
where. Last time that happen we moved to a different state. All these
years he's still the same man, more or less. I use to look up to him,
now adage I see him on a level plain and at times down on him. My
father is a man, no doubt about. He raised his kids well and provided
for his family. Sacrafices his life for ours. I'll eventually return
the favor but not right now. Not anytime soon. They give us more hangs
up than gifts. Eventually I'll see over these stupid notions, but not
right now.
~ con safos ~