When keeping it real goes wrong 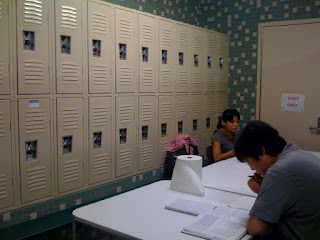 I loved those episodes of Chapells show. Alas, I am face with a moment
in life where keeping it real can go wrong. To fill you in, I wrote an
opinion piece for the school paper about the Chican Studies dept.
getting short changed for more than 40 yrs and my journalism advisor
responded by telling me, in front of the rest of the news staff, that
I'm whinning, selfish and greedy be because of over crowded classrooms
and crappy classrooms. She makes her point by telling me that I should
go somewhere else if I think it's soo bad at school.

According to her logic I should be going to a more prominent college
with better facilities in what I can only imagine is the better side
of town. Where minorities are the yard keepers, baby sitters and
custodians. Excuse me when I say WHAT THE FUCK !?!?!?!?!?!?!? I can go
on and on about the conditions at school and whine some more but it
doesn't get to the social and economic problems that are underneath
the surface.

I'm a second class "citizen" so I should get a second class education
to train me for some trade profession rather than academic
achivement ? And there's nothing wrong with that either, but there is
more out there than we are told. It's sad that students today still
have go overcome adversities such as the ones I mentioned. I don't
know the entire truth of things because honestly, I'm getting ahead of
myself.

I see the world for what it really is and it pisses me off. So then I
turn around and want to spread the word, but I can't articulate
myself. I still have a TON of catching up and even though all these
ideas are coming in and I want to act on them, I gotta remember to
take a step back and know what I'm really getting into before I put my
foot in my mouth. It's all a learning process of course, so it's only
a matter of time, as I further develope my consciousness to see the
real truths of the world. Other wise I might end up having a moment
when keeping it real goes wrong.