How Public Transportation Can Lead to Your Deportation 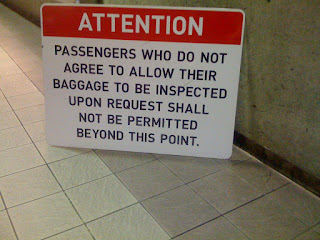 In this post 9/11 world, going about your everyday business can lead to anything, from getting arrested for having "intent" to being deported for riding the train. This is something that I am conscious of every fleeting moment of my life. Not a single second is wasted in acknowledging the presence of authority where ever I may be. Whether it's inside a bank or building with cops/security inside/outside or when the sheriff's department is hanging out at train stations with bomb sniffing dogs/checking fares.
I acknowledge them, make sure I have my stuff in order and go about my business. There's no reason for me to panic or freak out when all I'm doing is going about my day. As sad as it is to say though, there are some folks out there who do live in heightened fear of police or anyone with a badge, and even simple things like public transportation become things they have to think twice about.

You see, here in L.A. and around the country really, programs like Secure Communities and 287g are used and abused by cities and local law enforcement to catch people riding dirty and deport them. While these type of programs are tools in the "fight against terrorism," they can be abused and be perverted. Worst case scenario is that I am riding the train. The sheriff's dept., which is in charge or over seeing all of the Metro systems here in L.A. starts asking me questions for whatever reason.

They start asking for I.D., asking why I don't have CA I.D. and if I'm lying about my identity. They arrest me, plug my name into the data base, find out I'm undocumented and poof, you are turned over to ICE and placed in deportation proceedings. Scary right? And all from just riding the train to where ever it is I was going.

Earlier in the year, folks freaked out when a single tweet alerted folks that Home Land Security/ICE were checking I.D.'s at Union Station, the central hub for all trains here in L.A. The L.A. weekly even quoted me after I emailed them about what I saw that morning. Then the alert got on KPFK and it took on a life of its own from there. In the end, it turned out there was a larger than usual presence at Union Station, but nothing close to ICE actively asking folks for proof of legal residence.

The only other few times a year Union Station see's more police is when holidays come up. Every 9/11, the extra bodies and dogs are noticeable. Or even when's there random threats made, you'll see those cops checking for fares and eye balling people, trying to stop a "terrorist." These type of programs cause more problems than they solve. And it's been proven time after time. Public safety is a huge issue and how it's treated is questionable here in L.A. Police don't care about folks going to work, trying to meek out a living, all they know is that they have a job to do and it's nothing personal. They just follow orders, like a good soldier does.