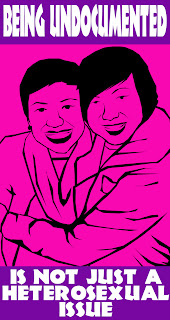 Making the connection between one movement to another is something that usually happens after I have personal experience with it. As lame as that is to say, that's my process. It's when I see something first hand that a light bulb in my head will turn on and start making connections that I've overlooked. And in my life, I've never had gay friends or knew anyone who was openly queer.

Needless to say that my community demonizes anyone remotely queer because of cultural norms. I myself grew up throwing around "gay" as a derogative term to emasculate friends during name calling matches. Very mature of us, right? And it's only been in the last few years that I've met queer folks who are not only out, but proud and loud. These are some of the most amazing folks I have had the pleasure of meeting and glad to call friends.

Julio Salgado is one of these folks. I've talked about his work before and some fo the stuff he does, but he's also one of the folks who doesn't shy away from awkward moments when it comes to talking about intersectionalities, specially with queer dreamers. You can read more about this on his tumblr and on this piece he wrote on the Huffington Post back in October of this year.

I'm not queer, but I am a supporter and ally in whatever shape or form that may take. And like Julio says, if you can't see the connections between both movements, then I don't know what to tell you either.

"What does being a queer have anything to do with the DREAM Act? Probably not the immediate meaning people want to see when they don’t immediately understand something. It’s about being part of a community that is constantly marginalized and finding strength in what others see as our weakness. It’s about finding a common ground and becoming a huge fist to punch the one bully we have in common. If you cannot see the connection, I don’t know what to tell you."

"There have been sit-ins, hunger strikes and countless calls to lawmakers to stop the deportations of undocumented students who have been in this country most of their lives. Oddly enough, a movement within this movement has surfaced."You see, a lot of the young people at the forefront of this movement also happen to be gay. Not only are these students proud to scream, "Undocumented and unafraid," but some have challenged the status quo even further by coming out as queer, undocumented and unafraid."