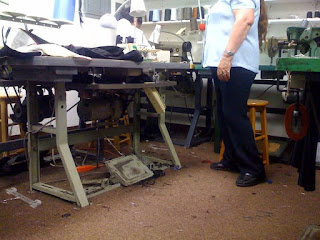 Today has been an odd day to say the least. At my "job" I was talking to one of my "co-workers" about random things and the subject of where we're from and how long we have been in the U.S. came up. My "co-worker" mentioned that he's been here 10 years. I asked why he came and he said that back in Mexico, he was running with the wrong crowds and doing drugs. He's also diabetic. He mentioned how he had a bad life style and after coming here, he changed all of that.
He has a child and wife and works to support them. He has more going for him here than if he would have stayed back in Mexico. He says that he would have ended up dead continuing with that life style. Now he works for his family and for a better life.
After work I visit my uncle at his tailor shop and my aunt begins to tell me about her lazy son and other family drama happening. She then starts to go off into a tangent about how life is better in Mexico compared to here. Over there they would have no trouble getting work and they just finished building a 5 room house. This is in Zacatlan. Other family is there and they're prospering as well. She tells me that if her sons were to move over there, they could be making great money working as hotel clerks because they're fluent in English. They tell me the samething.
Working in Acapulco or Zacatecas as a hotel clerk, hmm doesn't sound to bad really, but that's not for me. My parents share their ideology as well. Why work so hard to be something great when you can be living ok at some ok job for the rest of my life. At one point my father had high expectations of me. Being the store manager at a Food 4 Less to him is the top of the mountin. To this day my parents don't understand why I do the things I do. They know I'm a reporter, but they have no clue as to what I write about and how much I do.
Even if they did I know my father will still find some flaw in it cause it will never be enough for him. My sister tells me that he wants me to be with them out in Utah helping run the family restaurant they established. None of them really understand. I've acomplished so much in two years and grown so much that it's mind boggeling to me. I know what I'm doing and what I need to do and no one is going to stop me. Even though my family can't comprehend the magnitude and importance of what I do, other people do and sometimes that's all I need.
Traditional values don't work so well nowadays and have to be remolded and streched. I'm sure that I'm not the only person dealing with this, but at times it feels like it. My family prioratizes material things, I don't and that's where ideas clash. In order for me to make it in their eyes I have to own a home, nice car and have a hot wife and kids. My life isn't about things and status. When I'm gone, people aren't going to remember me for the things I had, bit for the things I did and the changes I helped take place.

Hey, yeah the Manager at Food For Less huh, yeah I feel ya, my mom would always tell me she wanted me to be a hairstylist or something in that range, which is okay but not for me....they also got no idea what i write about or even go to school for it's sad but that's how they always been.

i feel ya, i just went through one of those "what are you doing" speeches last night.

Its just too hard for them too understand i guess

I have a similar problem with my parents, although they have come to accept my ideas. It comes in a different form though. My parents, especially my father, have always wanted me to be the woman in the power suit, working in the big office for some transnational corporation, with the luxury car, living in the exclusive neighborhood, married to someone who is equally interested in making millions and will put a huge rock on my finger. That is after I get an MBA and I attain that six figure salary.

I can see that they want me to be financially self-sufficient so I don't have to depend on a partner and I appreciate the sentiment, but I don't need millions, diamonds, or mcmansions in order to accomplish that.

I think our parents are still holding onto the dreams that were born in our places of origin, but we see that here you can do something else and not starve.