Earlier today I blogged about being at the Mexican Consulate and renewing my I.D. because it expired. I mostly wrote about how I felt at that moment and it was a good way of getting that frustration out at that moment, but now that I'm at the house and falling asleep because I'm working as much as I can to have money, I'm behind on stuff. So I'd figure id write about my experience for those of you who will never experience such a thing and for those who have. 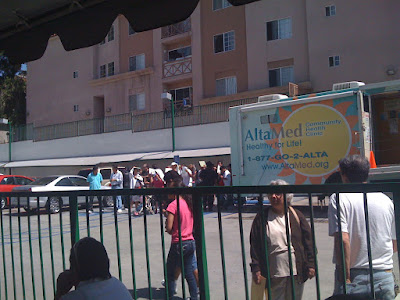 First things first. When you step through those gates you are literally in Mexico because the consulate is considered Mexican soil. At least that's what I think is going on. I never fully checked into that nor will because I could careless really. So yeah, I get patted down and asked what am I doing there, you tell them and they tell you to get in line. Yes, that line in the picture. The one where you have to stand in the middle of the fucking parking lot behind that stupid truck sucking on exhaust fumes and getting baked by the sun. You wait and stand there for a good 30 to 45 minutes until you move up on the line. Through out the lines, people from the consulate walk around telling people what they need in order to get their I.D. and or their passport. Immediately they get rushed with questions about if certain documents are accepted in lue of the required birth certificate and proof of current address. This helps filter out people who don't have the proper paper work and makes the line a little shorter. It sucks though when you see people having to leave because they don't have all the right documents. Happened to me earlier this year. That's why I had my sister mail me my birth certificate. 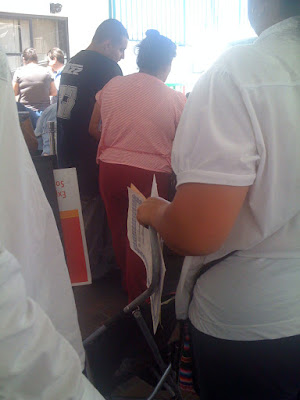 The whole I was there I noticed how people carried their paper work in envelopes, folders or just out in the open like it was nothing. It's all they have to prove to the consulate that they are who they say they are. It's literally they're lively hood and if they were to loose it, they wouldn't be able to do anything. There's all kinds of people here on a daily basis and the place is full everyday from opening to closing. Parents bring their kids either because they don't have someone to look after them or because they might need them to help them with the paper work because they can't read or write themselves. While in line, I saw a young lady go up to the table where they look through your documents to see that you have everything in order and she did. She was a high school student and was using her high school I.D. The only problem is that she needed to bring her official transcripts from the school so they could verify that she's a student. That's as far as she got today. 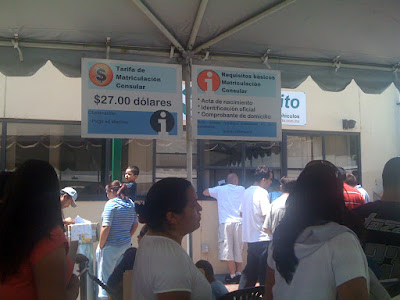 Even though there are signs and people explaining what is needed, there are some who are completely oblivious to what is going on and end up taking space wasting their and everyone else's time. Throughout my time in line I could see the frustration people had with the workers because they would ignore them when they tried to ask them a simple question. They would get frustrated because they've been waiting in line all morning or because they think they're special and need to move to the front of the line for what ever reason they think will get them to the front. Patience in not a virtue the average person has. That's why I looked through the consulates website earlier before I left to make sure I had everything. That's how I saw the $27 fee for getting the card other wise I would have been screwed. 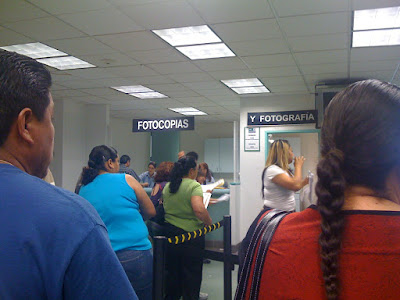 Once inside you get x-ray'ed by this huge machine and you wait in line for copies of your docs. The consulate has taken measures since they had a hostage situation a few years back that ended with the guy getting killed. There's some high stakes drama when people's livelihood are on the line. So after waiting in line outside, you get to wait in line inside, with the AC. 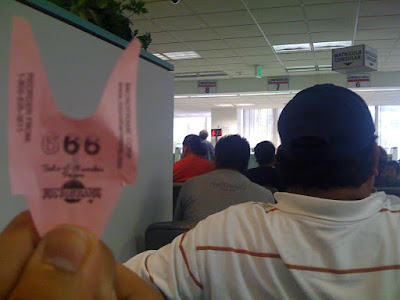 Did I mention that I was SUPER HUNGRY and SLEEPY the entire time I was there ? Well I was and the only thing that cheered me up was the fact that I was number 666 in line. Hell yeah, how do you like them apples eh ? It worked out too because I was wearing a Metallica shirt too. Score. It all went to hell when i saw the number they were at, 611. So I took a two hour nap and waited for my number to be called. Except for the hunger, that nap was pretty alright. 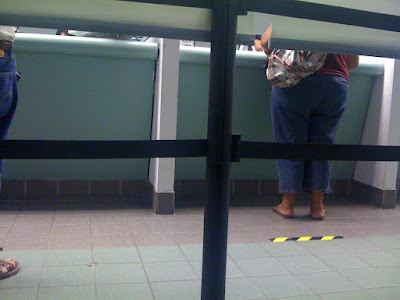 From there, this cute chick double checked my info and processed it. I had an easier time talking to her in English than in Spanish because I was so drowsy I wasn't really paying attention to anything lol. So from there I forked over my $27, took a picture and waited for my card to be made. No waiting two to four weeks for me hahahah, but having to be there ALL FUCKING DAY sucks ass man. I tell ya, when I left I grabbed something to eat and headed home. I can only imagine what'll happen when I go to get my ITIN. Geez. So there you have it folks, that's what it's like to go to the Mexican consulate and get/renew your I.D. that'll let you get into clubs, bars, get a bank account, buy a house, own a car and get insurance for it, uhh pay utility bills, enroll your kids in school all that stuff a California I.D. does. I would post up a picture of my I.D. but you never know who reads your stuff. Bunch of weirdos out there. You know who you are freaks.
Writen by El Random Hero at 10:56 PM