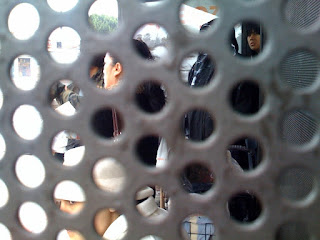 So yeah...been kinda busy with life to write anything worth while, so I'd figure I'd do the lazy thing and recycle something. Dumbs things about a dumb person. 25 of them to be exact. You will be a little dumbmer after reading this useless info so enjoy hahah.

1. I have two last names

2. I've been told I have the mind of an artist on several occasions

3. "Blank" is a fertile area, or a field in a fertile area, common in Spain, in which a variety of common vegetables and fruit trees, especially lemons, are cultivated for family consumption and sale. Typically, huertas belonging to different people are in groups around a river or other water source because of the amount of irrigation required. (That explains why I'm short and brown)

4. I once stayed with a dog lost dog for an hour waiting for the dog catcher to come get him, They never did.

5. I've been sleeping in a sleeping bag for the last two years.

6. I don't know how to drive, not like I can get a license anyway.

8. I have it in my head that I'm going to die young for some reason

9. I once put my thumb on a car cigar lighter t find out how it feels

11. I end up wearing black a lot because I never realized I bought shirts that were black. That and I have no fashion sense.

13. If I was a woman I would be an ugly woman to say the least

14. I've had peanut butter and jelly hot dogs thanks to La Crisis

15. Iguana soup really does taste a lot like chicken soup

16. I have captain americas shield sown on my paintball jerseys chest and spider-man on both sides

17. "It's only funny when I'm not hurt" is the first thing I said after I almost broke my right ankle doing a jump on a dirt bike.

18. I've been dumpster diving on more than one occasion

19. My ideas and concepts are so farfetched that I would be deemed insane for thinking like that.

21. I have three younger sisters

22. In a parallel universe I would be know as Peter Parker

23. I learned english and american pop culture by watching the Simpsons and tv sitcoms when I was a kid.

24. I cried when I saw both Babe movies

25. My last girlfriend tried to gentrify me
Writen by El Random Hero at 4:44 PM