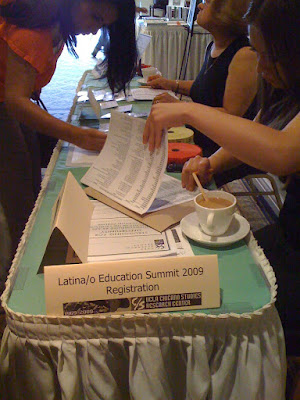 My ass hurts from sitting, but it was all worth it to be at the Fourth Annual Latin@ Educational Summit @ UCLA today. I tell ya to see soo many educators, students and advocates talking about the Latin@ educational pipe line, predominantly AB 540 students at the community and University level. The summit touched on different aspects of the pipe line starting from the K through 12 levels and how the problems start at the very beginning. To recap more or less, the presentation of K through 12 focused on the development of programs for students who speak English as a second language. The way the system is set up right now hinders students from not only learning, but from becoming fluent in English as well. Test are designed to test students knowledge, but are worded in such a way that some students can't make sense of them.

As a result of these critical issues and others, research and programs are being developed as we speak to help these kids and teachers dealing with these kind of kids in the school system and developing curriculum that will help them assimilate. This part of the summit kinda through me for a loop because I'm not familiar with it. None the less, the info presented was eye opening and helped put things into perspective because the high high school drop out rates are a result of students not being able to learn or grow while in the lower levels of the educational system. 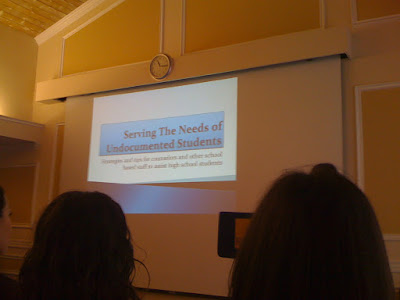 The second half of the summit focused on my part of the educational pipe line, AB 540 students in community colleges and in universities. I wasn't told anything new, except that everyone was given hard facts and numbers about what we already now, community colleges are a key part in AB 540 students education and a stepping stone to the universities. It was great to see and hear that people in attendance wanted to know more about how to train school faculty and counselors in what AB 540 is because so many students get the wrong information, which can cost them. They also talked about the crucial part support groups play in helping students succeed and make through the pipe line. For that reason, more and more schools are starting to create and expand their services so AB 430 students won't have to worry about their status or any other stigmata that comes with it.

There was also a heavy focus on educational programs that help students with the transferring process, filling out applications and scholarships within the support group and safe zones found at the schools. I was taken that students from my college where there talking about the "Adelante" program, which is what I just described and the four students that came gave testimonials about what the program meant to them, how it helped them and how more schools need to have those type of programs at their schools. Members of IDEAS from UCLA did the samething and shared their experiences and the value of the support groups and the network over all. They all gave powerful testimonials that reassured why everyone was there at the summit and why we all do what we do, for the future. Not just ours, but for those who have yet to come. 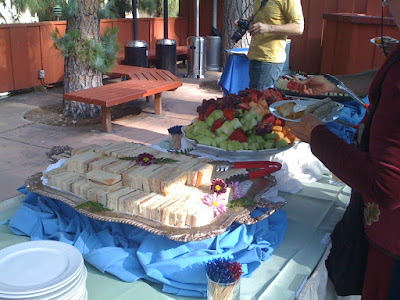 So over all the summit was kick ass and I'm glad I went. As you can see from this picture, UCLA hooked it up with a baller' ass spread, that included free beer :-) For those of you that couldn't go, you didn't miss out on much because most of the stuff they talked about we already know. Except for the K through 12 info, I didn't learn anything new. They just backed up what we all now with hard data and numbers, which is crucial in making the long term changes in the system. The next one is on the 31 and it's the student one so sign up if you can go. I'll be there and getting up @ 6:30 to catch the bus and get my lazy ass over to UCLA.

P.S. I gave a shout out to all the online bloggers who've I've met and continue to do their part by just blogging and spreading the word. :-)
Writen by El Random Hero at 10:33 PM