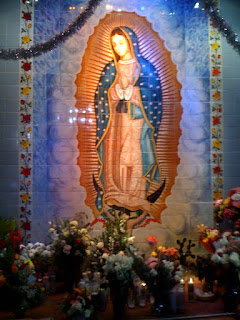 La Virgen, mother to millions and a symbol of hope to all of them. For as long as I can remember, the Virgen has always had a place in my families home. I never knew what reasons other than my parents try to be Catholics and because we're Mexican. It was only until later on that I learned about how all immigrants pray to her to watch over them and their journey to this country. They all pay her respects and some put all of their hopes in her, hoping that she will bless them and get them through their difficult time. 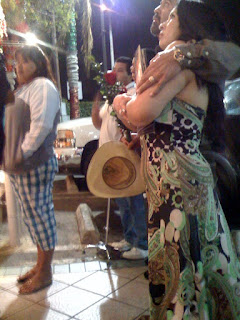 I can still remember my mom teaching me how to persinarme, which hand to do it with, what to say and when to do it. I was baptized as a yougling and my parents put me in catholic school, but I never finished it. I never fully embraced any of it because my parents didn't stress it or enforce it. Now adays I see beyond the surface and know better, even though I still do things and pay my respects. Some things just go beyond traditions and ritual and take a life of their own. 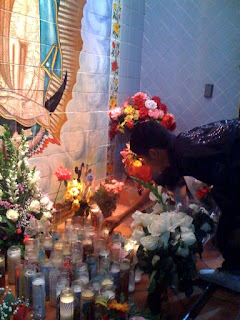 I often find myself people watching when they go up to her, touch her image and bless themselves. They bring candles, light them, stand in front of her and whisper a prayer to watch over them, their families and all of their loved ones. I myself write things down, light it on fire to light another candle and let it burn itself out. I see the dynamics of things and how they're changing from one generation to another. I see moms taking pictures in front of her as their daughters use their digital cameras, while they themselves look on in wonder of what it really menas to pray to the Virgen. I see cholos still paying respect to her because even they know that there are things bigger than them. In the end, she looks over millions and those millions put everything they have in her because they need to. They need to know that someone is hearing their cries and giving them some hope that things will get better. That the future will bring bigger and greater things. She's a symboy of all of that and much more.