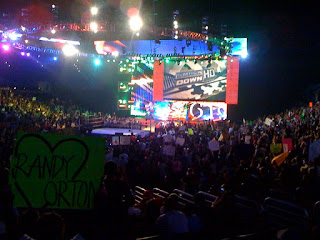 Little know fact about me, I'm a huge wrestling fan. I don't deny it,
I embrace it. I think i've mentioned that my father use to be a
luchador back in mexico. That instilled a passion in me that is still
going strong these days. That's why I was screaming my head off
Tuesday when I went to go see Smackdown. I had the chance to see
Monday Night Raw too, but inwas at the BBQ instead.

I had a bomb as time and while the matches were so, so,but just being
there with fellow wrestling fans, yelling and being amazed by the show
made it all worth while. The only thing that could have made this
better was if I had taken my sister. Guess there's always a next time.
Ohh there were two cage matches, which we eh. But it was a CAGE MATCH.
In the words of The Nature Boy Rick Flair,
"WOOOOOOOOOOOOOOOOOOOOOOOOOOOO"
~ con safos ~