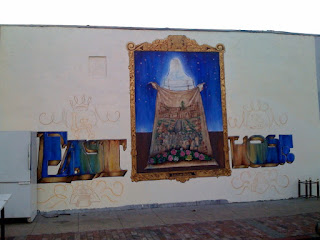 I'm writing this on the bus and trying not to get motion sickness so
here goes.

I just finished getting off the phone with my mom. I called because
it's mothers day and even I wouldn't be so cold that I wouldn't call
my mom just to say hi. We quickly catch up on what they're doing and
we get to talking about my youngest sister, wiggles. She's 16, home
grown in LA, a true LA Woman in every sense of the word and living in
the middle of no where Utah.

I was there and I left when I got the chance, but she can't. She has
to make do with living over there and going to school over there. I
remember the day we took her to her new school to sign her up. I cam
still remember the disticnt smell of a doctors office in the halls and
how nice the faculty and staff were. Hell, we met the priciple the
same day and he was a nice guy. Still, in the back of my mind I knew
where we were, what school my sister was going to be enrolled in and I
thought about how she's going to get a better education there than
here in LA.

Two years later and she's been going on and off from school because
she doesn't like it there. She doesn't like how the other kids look at
her, make faces and don't accept her for who she is, a Mexican
American. Somewhere in my mind I knew this could have been an issue
with her, but I put it off because I knew wiggles wouldn't let
something like that get to her, at the sametime I'm not there any more.

My 2nd youngest sister(20), loca for coco puffs has a sense of who she
is, what she's about and where she's from. If you met her, it'll be
like seeing what I would be like if inwas a girl. She picked up some
things from me and is coming into her own, she still has ways to go
but none the less she's not lost. Wiggles is another story.

From what my sis and mom told me, she doesn't know who she is yet and
having been up rooted from all of her friends here in LA got to her.
It's My fault for not being there and not being a better brother to
them, but what's done is done and now it's up to me to help her get
through this.

I need to talk to her and understand where she's at to know where to
go but I'm sure this is all going to end up with me explaining to her
who she really is and where she came from, an East Los Angeles
Chican@. There's no doubt in my mind about that because even though
she's getting older and coming into her own, specially at 16, she
needs guidance now more than ever.

When I came into my own and realized who I was, where I was from and
embraced it, everything started to make sense to me. It was like a
light went on and the shadows of the world disappeared. I'm going to
send them a few books and magazine articles I've written to help them
come into their own. Or at least figure who they really are. I feel
like I failed her for letting it get like this, but at least now I can
start making up for it.