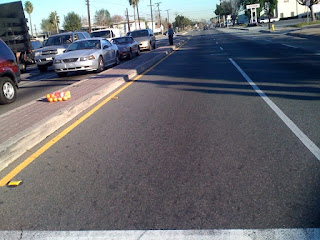 You see that man in the bad cell phone shot selling oranges ? I saw that man today & his family/friends down the street hustlin' oranges. He reminded me of some of the jobs I've had myself to make ends meat. I think back to those times and all I feel is anger, disappointment
and tragedy.

The other day at work I saw a street vendor, again with her kids trying to sell sliced fruit in bags, but everytime a police cruiser would drive by, they would all run for their lives carrying everything with them.

While I've had jobs like that, I've never been in the position of having to run away for fear of being arrested or moved away from the place I was selling. By I digress from my point, which is to talk about jobs that I've had.

In Mexico my parents had a fruit stand in one of the biggest tianguis(out door market) in the whole city. They know their stuff when it comes to fruit and they made a nice loving from it. They would take me along but at that age I wasn't really working, I was known as the devil child who was a walking mailstrum. My mom told me that I would go to other stands, especially my padrinos(god father) and knock over their stuff for no reason. Hence the name.

Between leaving Mexico and coming to America, my dad sewed in a factory and worked where he could till we we're all together. Working with an in-law, my father learned the trade of selling car tires. He knew where to buy them, how to retread them and how to put them on
cars. After a while he eventually saved enough money to start his own business.

In a few years and struggling soo much, my father finally made his promise real. He had his own business and he was ok his way to becoming a property owner. The house and business were basically the samething. There I learned to fix tires, how to retread them and how
to put them on cars. All at the age of 8-9. If I wasn't at school I was suppose to be helping him out, but instead I was Getting into trouble.

He lost his first business and managed to salvage another one in south central while at the sametime he bought an apartment complex in Long Beach. I hated commuting and I hated that job. It was more of the same crap over and over again. One problem my father had is that be liked to drink. He would make friends with random stragers,grill some carne asada and drink till the cows came home. They never did.

He lost alot thanks to his drinking and put my mom through a lot of shit that I'll probably never forgive him for. He spent soo much time, energy and money in those businesses that we could live like kings right now. But I always hated him because he always had the family
there no matter what. I remember one night coming home and my cute neighboor walked up to me in a stunning dress.

She just came from a school dance to get something and she asked my how come I didn't go. I
looked at my blackened hands, dirty shorts and messed up hair and I realized that she wanted me to be part of a world I will never be part of.

FYI she asked me to be her bf when I first met her, but back then I didn't even know what to do with a girl, let alone have a gf. To this day I still regret never manning up and taking her up on that offer. After all she asked me and all I did was shut my mouth in complete awe that a beautiful girl would wanna be my gf. Damn I'm an idiot.

After my father tired of the tire business, he got into picking up shopping carts for super markets. I'm sure you've seen those trucks driving around with shopping carts in the back. My father did that for a good year and to this day, that was the best job he ever had. His
area was in watts so needless to say that he had interesting confrentations with the locals.

Of course my father being that man that he is, he would take either my mom or me along with him to help him out. All we did was drive around picking up carts and taking them back to the store. Some days were better than others but that was a job I hated. I remember when they
would drive me to school in the truck or pick me up, I would lean down super low soo no one would see me.

In a spur of the moment idea, my father realized that he could male his job easier if he bought bottles and cans from homeless people. He would get his money back and keep the shopping cart at the same time. Buying bottles and Cana from crackheads was another low point. They
would come at all hours of the night and some sold him things that they stole.

I was ashamed of his job and I denied it when friends would question me about it. I was fat and nerdy, I didn't need anymore problems at school. I even remember when his boss gave him a Christmas bonus for all his hard work. I may have hated that job, but it was one of best one a had. An honest job.

In my next post find out what new job my father embarked on after leaving the shopping cart trade. Discover the secrets of my fathers Midas touch and how I hated every moment of it. Same Bat-time, same Bat-channel.