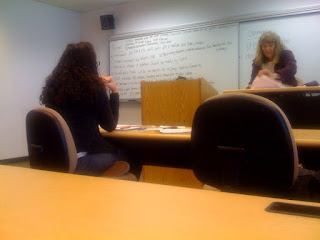 Ahh the school news paper. I've been a part of it directly and
indirectly for as long as I have been in school, two years. Ohh the
drama that comes sometimes would make for a great MTV reality show.

Case in point I dated someone on staff and it didn't turn out well ;-)
Other than that being on the newspaper is a great experience that I
wouldn't change for nothing in this world. I've grown and learned in
leaps just being here, the people around me and of course our
instrctor, she knows her stuff.

I have matured in more way than one in part of the newspaper. I went
from being a shy, chubby, nerdy guy to being being a half cocked,smart
ass that thinks he knows everything. But yeah, part of the reason the
way I am is because of the paper and the work I have done here.

I can safely say that after being here so long and doing so much work
that I consider myself a real reporter that's still learning the
ropes. I've taken what I've learned here in the paper and applied it
to life and especially blogging. Ohh dear god, I remember how bad a
speller I was, I would change tenses it was all crap really.

But the paper changed all that. It's opened doors that have put me in
the pipe line to meet and write about the people in my community and
the work they do. I've ascended beyond anything I could imagine both
intellectually and as a person. I'll always be appreciative of this
but as of late I've felt like a big fish in a small pond. Transfering
is my next step but I still have room to improve and help others out.
So like I wrote before. This is going to be a great semester. I can
feel it and my hands are shaking. That's a good thing.
~ con safos ~