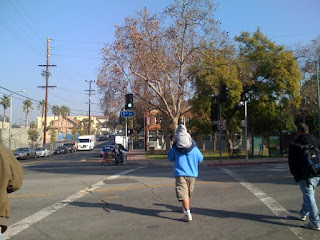 Needless to say some of us have issues with out parents for one reason
or another. I don't know anyone that doesn't have some hang up with
their parents and in most cases it's a BIG hang up that streaches and
strains relationships. Something are generational and others can't be
helped, but whatever it is, it can be changed for the better.

I was texting a friend and at one point I mentioned that my parents
never hugged me when I was a kid, least not that I can recall. She
also didn't recieve "proper attention" when she was a kid and said
that it was a vicious cycle. I concured and said that it all ends with
me.

Another friend confided in me that while she has a much better
relationship with her parents, she says that they're over protective
and over bearing on her and her actions. She doesn't like being under
such scrutny. In fact when she had the opportunity to escape her
parents she did so with out haste and moved to another state.

Too extremes yet I feel that sometimes I wouldn't mind being under
such parents that care too much rather than parents who care some, but
it's evil of me to say that. I'm sure all parents love their kids with
all their heart, some are just better at provinding for them and
giving them the opportunities they never had themselves.

Whatever the case maybe, it doesn't have to continue. As the first
everything in my family and the oldest of four, I have a trendous
opportunity to end the cycle of neglect, ignorance and in some cases
pain. I can safely say that I am my fathers son in every sense of the
word. Not only am I his splitting image, but I picked up a lot of his
habits and traits. Some good and some bad depending on how you see
things.

Point is that even though I picked up a lot of his habbits, I turned
them into my own and I make them work for me, so to speak. One good
example is that my father can hustle. He's good at wheeling and
dealing, talking to people like he's known them for years and at times
getting the job done. I can say I'm like him in those aspects but I
put my own twist and changes into what he does. I can converse with
the best of them and adapt to situations easily so I can do work and
get the job done.

I'm not alone in rhis of course. Most first generation kids kinda go
through the same tribulations and adapt to their environent utilizing
the values and ideals instilled unto them by their parents. As their
kids we have the opportunity to take the best them and incorporate it
into our lives so that when we have kids not only know what our
parents taught us, but everything else we learned.

As their kids we have the opportunity to end a lot of problems that
keep our people down like not finishing school, working degrading, go
no where jobs and becoming more active within our communities. Course
this isn't a new concept or anything, I just felt like writing about
since the issue of parents kept coming up. Part of being a parent is
passing on knowledge and helping the next generation improve their
lives. I myself cannot wait for the day when I become a father.
Considering everything I know and lived through and have yet to
experience, I have a lot of knowledge to pass on.