Tetris, will you be my valentine ? 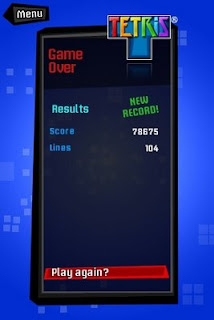 Long before I lost weight, I went from 200 lbs to 180ish now, my only
girl friend was cartoons, comics and of course video games. My biggest
problem with the opposite sex was that I lacked self confidense to
talk to girls.

The funny thing is that girls went after mr sometimes, but I was such
an idiot that I never did anything about it. Even guy friends would
tell me I'm an idiot for not picking up on girls. Sigh... Luckly,
those days are behind me and now I have no problem going after girls
that catch my eye.

Course every now and then I'll revert back to my old ways and be like,
"that girl is outta my league. I shouldn't eve bother because she
probably already has a man." I don't let that happen too often, for
the better part, I finally got some balls to ask girls out. Better
late than never right?