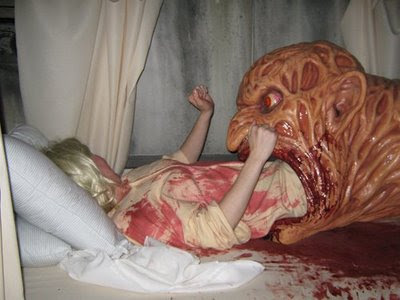 ~ At universal studios halloween haunt last year ~
Holy crap does this one take me back. What you are about to read is me at my most, well how can I put this... idiotic. I dug this up because I remembered I once wrote a "what I would do if zombies attacked" plan. Yes I made one up don't laugh. I've been listening to the new Cannibal Corpse album "Evisceration Plauge" and well yeah. I'm reviewing it for my school news paper, thanks for hooking it up ghetto vegan. Now before worn, I wrote this at a time in which my spelling and linguistic stills weren't up to par. In fact the only reason I keep stuff like this around is to see how bad I was and how much I've improved. At least in my writing. I play a lot of video games, read a lot of comics and just basically live in a fantasy land.

First of all if anything from the movies is true(but probably isn't)then zombies shouldn't be that hard to get rid of. First of all zombies wont be the cliche souless creatures that walk and moan with their hands in front of them. If anything "real" zombies will be physically able to do many things and run at a good paste given their legs aren't gone or damaged in anyway. However that doesn't mean they're rocket scientist. Sure they can give you a run for your money, but that doesn't mean they will be able to have problem solving skills or open doors. Thus when they do attack,how we defeat them will depend on where I am when they do strike and what stores are nearby.
In the ideal situation I would hope they attack while at the mall like in the movie but no such luck. If they attack while I'm at home I have an advantage. I can gather tools,weapons and supplies to move out and and make a plan.Said plan would be to save all emergancy supplies such as food,fire maing devices and other things of that nature. I would then proceed to open a can of whoop ass on any zombies near my home.
By doing this I can asses any weaknesses that zombies may have if any.Oviously you can take their heads off. Blow limbs off,but can the undead really ever die...my guess is no. Thus after playing resident evil games and 1st person shooters I will disable them. Take off their legs and leave them crippeled.If they really piss me off I'll take their arms off too with an axe or something and kick them around a bit.I would then proceed to take an SUV or truck like vehicle and make my way to the nearest safety location or failing that the nearest wal' mart/ target closest to my home.Hiding out at a mall is cool but tstores like target have all the things you could ever need. Food,clothes,first aid supplies and entertainment.
Thus once in the vehicle I would do everything in my power to run over as many zombies as possible and pick up people in need of help.While on the road I would go to friends houses and pick them up or just call them and ask them what they're going to do.Following that I would then head to the nearest target/k-mart.Once their I would enter through the back o in a fashion that once I'm inside none of the zombies would be able to enter as well. However if the zombies have already taken over that store I would asses the cituation.If there's not too many I would take them out and take the store from them.
Yet if the store is lost I would plow through it in my vehicle and shop from inside my vehicle picing up stuff I need or want. Not to mention more weapons. With  that being said going to a gun store would be the best plan but I'm sure the people in the guns store don't want or need anymore companie.Thus if I show up to their store with supplies and food I'm sure we could work something out. Once a location is secured I would just wait it out and in my free time I would kill zombies for fun.That and if any hot girls are with me I would oviousl use the line "you know...now that half the world is turned into zombies we're going to need to repopulate the earth...what'da say? hmm" @_@.
However there's still the question as to how people became zombies in the first place. Whether it be by science of magic I'm pretty sure any physical contact with them seals your fate.Yet if its caused by an air born virus then we're all screwed. Now that I think of it maybe leaving the country doesn't sound like a bad idea. I would have to look for someone who can fly a plane,helicopter or ship.Take all our stuff with us and head to Japan or somewhere else that's closer and zombie free.We would be able to stay cause we could ask for shelter. That is if we aren't exiled for fear that we might be carring the zombie virus/curse or what ever it is that caused all these problems.
If that were to happen then we would be screwd.I say I just find a good safe place to wait it out and see what happens.That is unless they take over the military or something.How knows maybe the zombies have already taken over and are making us make more zombies by killing each other so that when they take over they'll have plenty of help to rule the surface world. Also I realize that I could make a joke about television,computers and myspace turning people into zomibies nut I'm better than that.Besides that joke is old and played out.
Writen by El Random Hero at 8:50 PM